Hi! My name is Mari from Namaste Mari and before I go on to tell you about my first 5K experience, can I just say how honored I am that Sarah chose me to do a guest post on her blog. Especially since she is one of the people that motivated me to run my first 5K. Ever since I started to follow her blog, she has inspired me with all the amazing things that she has done to make herself healthier in every aspect of her life!

Before I tell you all about my big day…let me just give you a little back story on me, if you don’t mind =)

A few years ago I was overweight and extremely unhappy in my own skin. After a really bad year, I decided to make a change! I went from eating fast food almost every single day to watching my portions and filling up on fruits and veggies instead of super sized fries. I also started to workout religiously…I went from weighing 220 lbs to dropping down to 138 lbs. I was even featured in Self magazine.

However the quote in Self haunted me “I wanted to be the girl I envied, running down the street. Now I am, and I owe it all to Self!”. By the time this article was published my running was sidelined because of an injury; I developed plantar fasciitis.

Every time I would try to pick up running again, something would stop me dead in my tracks but this year was different…this was going to be MY year. I made a vow to myself that I would run my first 5K before the end of the 2010.  My plan was to run my first race in May but Jess from Fit Chick in the City encouraged me to run The Coogan’s Salsa, Blues & Shamrocks 5K Race at the end of March. I used the Couch to 5K Training regiment and I found it extremely helpful. It was easier to tackle this challenge one week at a time instead of looking at the big picture and getting discouraged. I joined a gym and would train whenever I would get a chance. I also found a great running partner on the other end of the Coast! Amanda from Two Boos Who Eat was also training for her first 5K and we became a great support system for one another! (Wish her luck on her upcoming race!).

When the race drew closer, I started to train in the park so that I could get accustomed to running on hills. A few days before the race, I started to develop pain in my shins…probably from the hills in the park Crap what did I do? I asked Jess for some advice and she basically told me to stop running until the race…she said one thing that stuck with me “do you want to run tomorrow or do you want to run for the rest of your life?”… the choice was simple. I took her advice and just relaxed for the next couple of days.

I could not have asked for a better day! The sun was shining and the sky was blue…the temperature was around 40 degrees…great running conditions. The race started at 9am but we got there a little early and it was a ghost town. 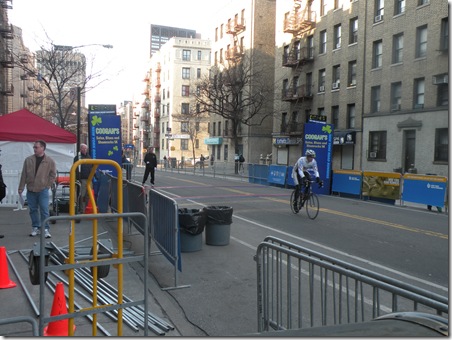 My nerves were getting the best of me but having my family there was very reassuring, they even made me a sign. (titi is auntie in spanish…my niece held the sign)

I  reluctantly parted ways with my family and found my place in line…before I knew it, the ghost town was filled with around 6 Thousand people!

My legs were trembling either from the cold or fear…I started to talk to the lady next to me and told her I felt like I was about to go onto a Rollercoaster ride…you know that feeling? when you are excited to go on the ride but there is a little voice in the back of your mind, telling you to get off of the line.

Before I knew it, it was time!  I was off running my first race… 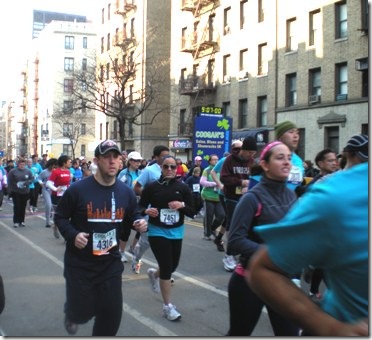 I felt so great and then BOOM reality hit…THE HILLS! The race was being held in Washington Heights which is known for it’s hills and boy did I feel them. There were times that I just wanted to stop but I dedicated the 5K to my grandmother who passed away two years ago and I promised myself that I would make her proud. I fed off the energy of the people cheering and all the bands playing along the route and knowing that my family would be there at the finish line. I ran! I ran up and down those hills, I ran when I thought I had nothing left in me…I RAN!

And just like that I ran right through the finish line! (I completed the race in 33:06) 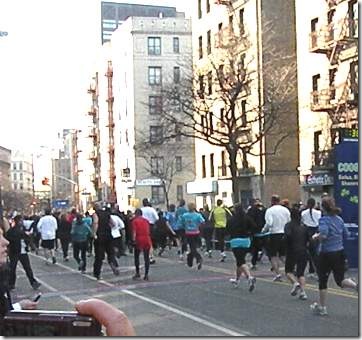 The minute my legs crossed that line, my eyes filled with tears! I was filled with so much emotion, I finally did it! I went and hugged my family and sobbed like I just completed the NYC marathon because to me, I just did!

This is only the beginning for me…I can not wait to conquer many more!

Thank you for reading my recap and once again, thank you Sarah for including me in your guest posts!