Short version – in 2007, I lost 70 lbs and have been maintaining ever since. Wanna know more? Read on.

I have been dealing with issues related to being overweight for most of my life.

As a kid, I was sometimes called fat by other kids and I was told by a modeling school when I was 10 years old that I needed to lose weight. Actually they just suggested to me that I start getting 30 minutes of activity a day. They were right, but these suggestions were not good for my self-esteem.

I distinctly remember wearing a size 12 when I was 12. I recently looked back at some old medical records and I weighed 140 when I was 10 years old! Living in a house with two overweight parents definitely had it’s challenges growing up (that I didn’t realize at the time), but as for my teenage & adult life, I have no one to blame but myself for how I ended up the way I did. And thank God all that has changed now!

I had always thought of myself as “fat” but it wasn’t until the end of high school and college that I really started to put on the pounds. In 1998, when my first real boyfriend in high school dumped me, I went into a downward spiral. I quit the volleyball team, started eating my emotions and became pretty sedentary, choosing to spend my time watching movies or just hanging out with girlfriends. I ate terribly, a mostly fast food diet, and had a part-time job that didn’t require much movement. I was heading down a dangerous path. The truth is, he didn’t do this to me, it was already going on and I just amplified it when bad things happened. I also lost a close friend a month later — it was a rough year. 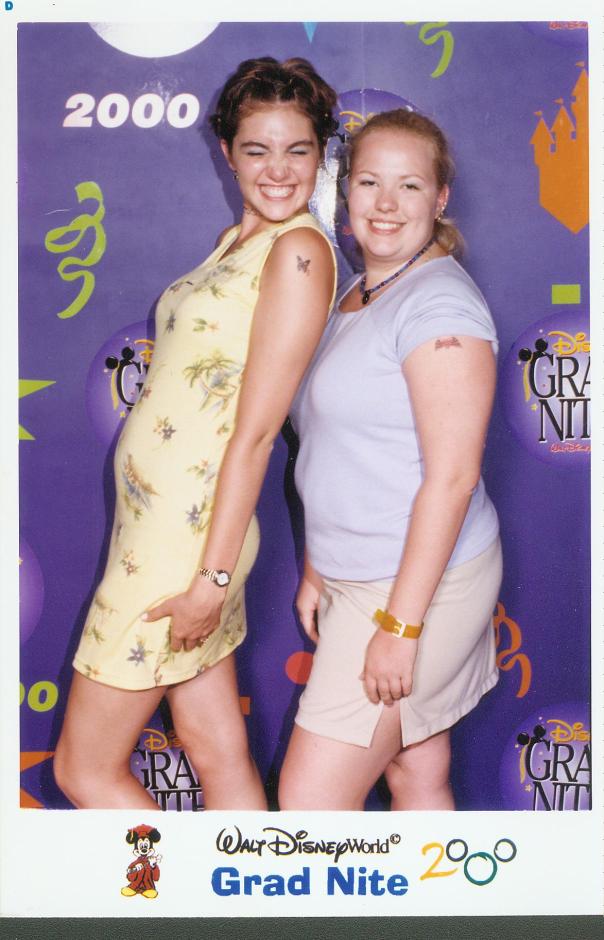 Senior trip to Disneyworld, May 2000

I have tried every “diet” you can imagine. I have been to Weight Watchers 4 times! I think it works really great for some people, it even did for me sometimes — I was really good at losing 20 lbs and then I just reverted back to old habits. In 2003, I was doing really well on the program and exercising regularly, then I got sidelined with emergency gallbladder surgery and the pounds came back and then some.

I’ve done South Beach, Slimfast, The Zone, a bad/uneducated attempt at vegetarianism, you name it. I could stick to a diet for about a month and then fall right back off the wagon. It just goes to show you that diets don’t work! I’m living proof.

I started dating my husband in 1999 and he has never made suggestions or comments about my weight, ever! That’s how I know I got the right one 😉 But when I started changing my life and it started showing in my happiness and energy, he was very supportive. In order for me to live longer and to have children someday, these changes were necessary and I hope in some ways I am becoming a good influence on him and that he can see how being healthy is really important. Here’s what I looked like when we got married in 2005:

Pictures are hard to look at sometimes…it’s just such a shock to see me then compared to how I am now, in a good way. But sometimes I can’t believe how much time I wasted being unhappy and unhealthy. I can’t wait to pass on everything I have learned to my future children so they hopefully don’t have to go through what I went through. I know I am much stronger for it though.

After we got married, things got even worse for my health. Our first few months of marriage, our schedules clashed and I spent a lot of time at home alone or going out with friends. I had pretty much abandoned any healthy eating, choosing instead to just eat whatever my husband ate at home, fast food, and a ton of 3 Musketeer bars. I had one everyday for a while there. We even bought the big box of 36 at Sam’s one time! I spent most nights after work just laying on the couch, watching tv and falling asleep because I had zero energy!

In January 2007, my entire life started to change. I met a wonderful lady named Caryn, who eventually became my personal trainer. But first, she was the person in charge of a class at my place of employment that they called “Weigh to Go.” It was sort of like Weight Watchers — we would meet once a week, weigh in and discuss topics related to nutrition and exercise. Only they weren’t pushing any program, like points or carbs or zones. But we did have food and exercise journals that we kept daily.

Just having everything I had eaten in an entire day right in front of my face was eye opening. I had journaled with Weight Watchers but only for points — I had no idea the exact amount of calories, fat, carbs, protein, fiber, etc. that I was getting. This food journal was much more detailed and it allowed me to really see the areas I needed improvement in.

The first week, I weighed in at 213.6. I had just gone to the doctor a week prior and I think it was her showing me and telling me how unhealthy I was that really made it click, finally. I remember the sign on her wall that said “Eat less. Exercise more.” I knew what I needed to do, but until then I hadn’t been ready to do it.

Week by week, the weight started coming off. I was so surprised because I was used to having my weight go up and down on a weekly basis, but by not being on a diet, I never felt deprived or the need to “cheat” so everything stayed pretty consistent. I was also working out more, trying to get in at least 30 minutes of exercise per day either by walking, doing the elliptical or playing a sport. It seemed so easy! They are right when they say keeping it off is harder.

Here’s a glimpse of the progress I made in the first 8 months:

I reached my “comfort zone” in December 2007 (11 months after the start) and I have maintained ever since then. Some days I feel like I could stand to lose a few more pounds (according to the weight range for my age, height, etc.) but for the most part, I feel very comfortable in my comfort zone of 145-150 lbs, which is where I am the majority of the time. I have been below and I have been above, but most of the time I’m right in the middle.

When I started writing this blog in May of 2008, I had just finished my first mini-marathon. If you had told me back when I was the old me that I would someday weigh 70+ lbs less and be running, I would’ve told you to check yourself into the loony bin.

Here is a post I did on the noticeable changes I have experienced : Posting on progress

The biggest changes have come from the inside. I am happier and more content in all aspects of my life. I have found a new passion, a new way of living and a new meaning to my life (with God’s help of course). I cannot even begin to describe how incredible this journey has been for me, but I hope this page gives you a little insight.

Leave a Reply to One Healthy Apple Cancel reply